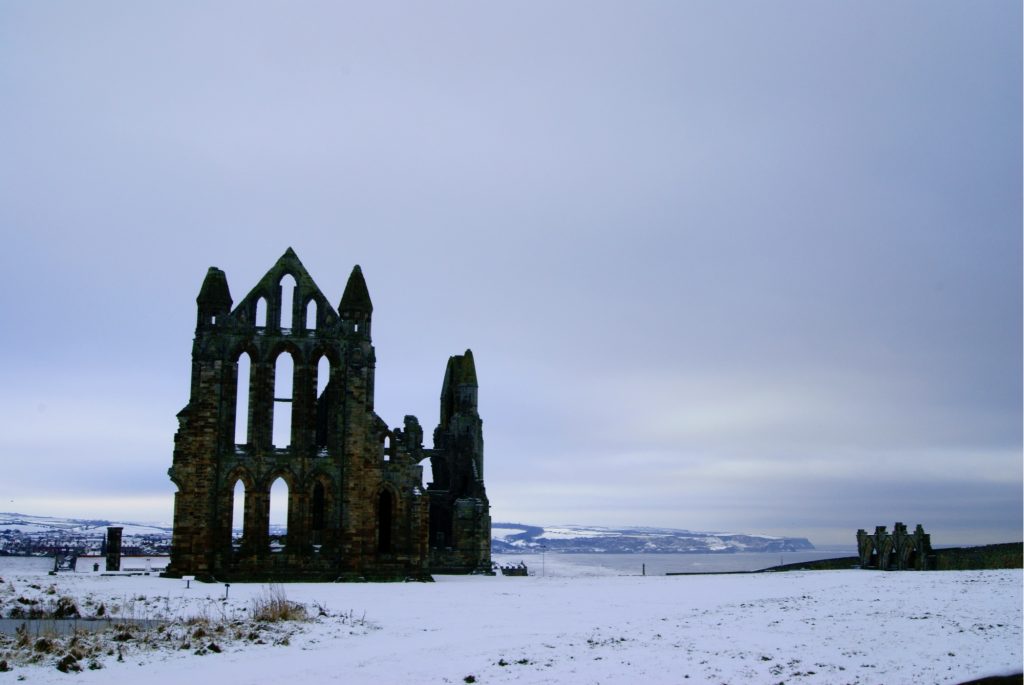 Contact Whitby Abbey on 01947 603568 to speak to the English Heritage charity for help with planning a visit to these iconic ruins.

The ruins of Whitby Abbey are one of the most famous sights in North Yorkshire. The location is known internationally thanks to the classic Gothic horror novel Dracula by Bram Stoker, first published in 1897. In the book, the vampire Dracula came ashore at Whitby in the form of a large dog leaping from a grounded Russian ship with no survivors on board. Stoker set part of the novel in Whitby as Dracula stalked Lucy Westenra while she was on holiday there. Outside of fiction, the facts are that Whitby Abbey began as a Christian monastery in the seventh century (657 AD). The older Anglo-Saxon name was Streoneshalh. The monastery was ransacked by Danish Vikings in the ninth century, then left abandoned for the next 200 years. It later became a Benedictine abbey, founded by a monk who was previously a soldier for William the Conqueror. The abbey was destroyed in 1540 during the King Henry VIII’s Dissolution of the Monasteries, but the ruins became a landmark.

Visitors are able to explore the ruins of the church and discover what remains of its once-fine details. The church was further damaged by German shells in 1914. From where the abbey stands on the East Cliff headland, visitors can take in beautiful panoramic views of the sea and harbour as well as the town of Whitby and countryside beyond. There are 199 steps leading up from the town to the abbey, which Dracula in animal form ascended from the abandoned ship. Bram Stoker’s novel has influenced the development of Whitby into the “Goth capital” of Britain. That doesn’t mean that the site is too spooky for kids – there are plenty of possibilities for family-friendly fun at Whitby. The shell of the nearby Cholmley family mansion was turned into a Visitor Centre to house displays and exhibitions about the history of Whitby Abbey. There is also a gift shop for souvenirs. An investment of £1.6 million is going towards revamping the site, including adding a new coffee shop.

Whitby Abbey is open to visitors from 10am to 6pm during the months from the end of March to September. In October and November, it will close earlier at 5pm. The last admission for the day will be half an hour before closing. Whitby Abbey is normally still open on bank holidays. In the winter, the abbey will close to visitors from November to March for redevelopment work on the site. There is an admission charge to visit the abbey and visitor centre. Prices are £7.90 for adults and £4.70 for children aged 5-17. A concession rate of £7.10 exists for students and seniors over 65. There is also a family ticket available, or free entry for English Heritage members. You can add a voluntary donation of 10% onto your admission fee with Gift Aid to support conservation efforts.

Groups of 11 or more people can get 15% off when buying the tickets together, plus free entry for any tour leaders or coach drivers. You will need to contact the site to make an advance booking. Free educational visits are available for school groups. A tour guide is not provided, but there are online resources for teachers to use.  There is plenty of space for coaches at the Abbey Headland Car Park, but there will be a charge to use it.  The average length of a visit to Whitby Abbey is 1.5 – 2 hours. For visitors with disabilities, there are wheelchairs for loan, accessible toilets, and tour transcripts, and assistance dogs are allowed onsite. If you are unable to climb the 199 steps from the harbour, there is road access via the cliff top. There is a picnic area to eat in or a café nearby.

Whitby Abbey is one of the historical sites managed by the English Heritage charity. You can contact them by calling 0370 333 1181 to discuss the site and its operations. If you want to speak to somebody at the actual site, then you can call Whitby Abbey on 01947 603568. If you are unable to call, you can speak to English Heritage regarding any queries you have by e-mailing customers@english-heritage.org.uk, or opening a web chat. Someone should be available to help you between 9am and 5pm from Monday to Friday. Whitby Abbey is located at the address below, which you can use as the postal address to mail letters.